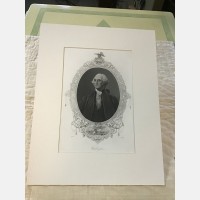 Engraving is the practice of incising a design onto a hard, usually flat surface by cutting grooves into it with a burin. The result produces an intaglio printing plate of copper or other metal for printing images on paper resulting in prints or illustrations. These images are called engravings. Engravings is one of the oldest and most important technique in print making. The most common engraving plates are copper, copper-plate and steel.

During the 1820's steel engravings began to replace copper as the preferred medium for illustrations, but still rivaled by wood engraving and later lithography. Steel engraving produced plates with sharper, harder, more distinct lines. Also, the harder steel plates produced more longer wearing dies that could produce many copies before needing refurbishing. Commercial etching techniques gradually replaced steel engraving. It is still done today but to a much lesser extent. An exception is currency which is all steel engraved.

We are offering an antique steel engraving of George Washington from the book, "The History of the United States of America, Vol II" written by Charles Mackay (1814-1889), published by Virtue & Co. London,1860. The engraving measures 9.75 x 6.50". 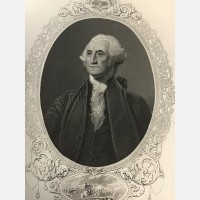 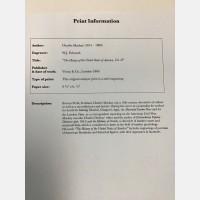